This site uses cookies to analyze traffic, remember your preferences, and optimize your experience. Learn More.

Text-to-speech (TTS) markup is text with imbedded indicators that control speech synthesis from the text. Speaking qualities such as the speed, pitch, emphasis, and word pronunciation may be tailored in reproducing speech from text.

A TTS grammar is a collection TTS markup. A text-to-speech engine (i.e., synthesizer) uses TTS markup to enhance its ability to synthesize speech from text and generate the audio for playback.

What is Markup Management?

Markup management enables you to:

Chant VoiceMarkupKit is text-to-speech (TTS) markup language management software that enables you to generate TTS markup to enhance the playback quality when synthesizing.

VoiceMarkupKit provides you a simple way to generate text-to-speech markup. Applications can markup text as part of its runtime operation to enable real-time customization and tailoring of your text-to-speech environment.

It simplifies the process of generating Acapela TTS Tag, Microsoft SAPI 5, and W3C SSML markup language to use with your favorite speech synthesizers.

VoiceMarkupKit includes C++, C++Builder, Delphi, Java, and .NET Framework, class library formats to support all your programming languages and sample projects for popular IDEs—such as the latest Visual Studio from Microsoft and RAD Studio from Embarcadero.

The class libraries can be integrated with 32-bit and 64-bit applications for Windows platforms.

VoiceMarkupKit encapsulates all of the technologies necessary to make the process of generating markup simple and efficient for your application.

Chant VoiceMarkupKit handles the complexities of generating text-to-speech markup for various markup syntax. Applications can tailor speech synthesis to produce sounds in familiar dialects, speaking patterns, and accents of end users. Applications can adjust TTS markup as needed for the synthesizer to enhance the playback quality when synthesizing.

By generating TTS markup at runtime, your application can maximize the quality of TTS playback and offer your end users the flexibility of using various synthesizers with your application.

Within Chant Developer Workbench, you can:

You may explore the capabilities of Chant VoiceMarkupKit for 30 days. To continue to use the product after 30 days, you must purchase a license for the software or stop using the software and remove it from your system.

The Chant VoiceMarkupKit license is a single end-user license. Each developer who installs and uses VoiceMarkupKit to develop applications must have their own license.

VoiceMarkupKit class library names vary by platform: Windows 32-bit and 64-bit. This helps ensure the correct library is deployed with your application. 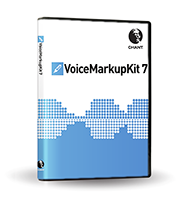 Order Chant VoiceMarkupKit online at the Chant store or through your preferred software reseller.

Try It Buy It